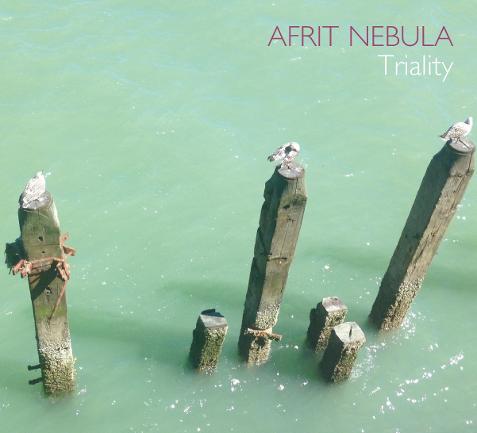 FMRCD468 – BUY THE CD HERE from the FMR Records website

You can now buy Afrit Nebula’s nine-track debut album,Triality (released on the FMR label in 2018), direct from this website for £10 (p&p included). Just click on the PayPal button below left and pay either with your debit or credit card or PayPal.

The album showcases eight original compositions ranging from the haunting to the incendiary, plus a cover of Ornette Coleman's "Lonely Woman".

THE GARDEN OF LOVE (AFTER BLAKE)
(Ken Edwards)

You can stream the tracks above by following the Soundcloud link. To buy a download, go to FMR Records' SubRadar page

Is it jazz? Is it rock? Is it ethnic music from the Balkans, Cuba, Turkey or a vibe from outer space? Music (including jazz itself) has always evolved through cross-fertilisation and mutation. Tenor saxist Jan Garbarak drew on his Slavic roots, Pharaoh Sanders was inspired by both African and Eastern traditions, Sun Ra encompassed big band swing and ferocious electronica. What’s special about this trio (sometimes augmented to a quartet) is that they subvert the concept of genre while managing to explore distinctive musical identities through adventurous improvisation - and people can dance while they’re doing it.

It’s certainly a high energy opening. In ‘Something Good May Happen’ percussionist Jamie Harris sings defiantly over urgent riffing from bass player Ken Edwards and saxophonist Elaine Edwards who switches to skirling flute, driven on by the primal drumming. ‘Raga’n’Bone’ is more contemplative, featuring flute offset by intricate polyrhythms, while ‘Bulgarian Rock’ floats over a 7/8 Balkan time signature, a pattern often favoured by The Moors, Ken and Elaine’s ‘other band’. The bass pulses under spritely soprano sax but the minor key evokes a melancholy aura. It’s a new version of a track from their 2015 debut EP with a keyboard overdub by Elaine that only enhances its spooky ambience.

‘Threads’, a tribute to avant-garde reedman Henry Threadgill, weaves a sinuous flute line, stalked by Ken’s bass and Jamie’s hypnotic drum figures. And the title of William Blake’s poem ‘The Garden of Love’ supplies the hook for a richly melodic song, featuring Jamie’s eloquent vocals with backing vocals from Heather Sidery. There’s a different kind of reference in another song title, ‘Tixerb Kufyeh,’ apparently an ancient Turkish curse meant to be pronounced backwards. It’s a fierce instrumental, given extra attack by the addition of co-producer Darren Eve on guitar. ‘Teal Tension’, also instrumental, focuses on tenor sax, in a solo that expands from sparse riffs into an intense improvisation.

My favourite track, however, is ‘Breathe’, which begins with a montage of overlapping voices - yogic breathing instructions, fragments of poetry. It morphs into a brooding tenor solo over a subtle interplay of bass, keyboard and percussion before Jamie Harris’s eerie chant emerges from the mix and the piece resolves into a reprise of the contrapuntal voices.

Ornette Coleman is a hard act to follow but the Afrit cover of ‘Lonely Woman’, perhaps his best-known piece, does the composer/saxophonist justice, especially in the way the sound of Elaine’s soprano sax shifts from purity to a raw, bitter-sweet tone as the improvisation evolves, very much along the ‘harmelodic’ principles that Coleman developed, in which all the musicians probe and play off each other in a constantly shifting sonic landscape. It’s a fitting conclusion to a fine release from one of Hastings’ most original bands. 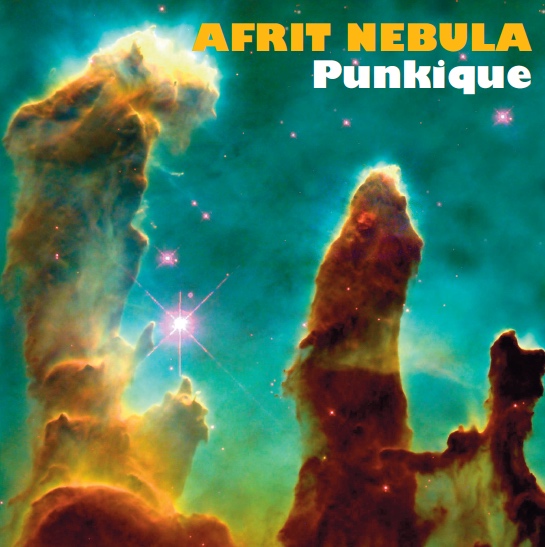 Afrit Nebula's first release was the EP Punkique, featuring compositions by all three of the band and a Jimi Hendrix cover. The album can be streamed and downloaded here. The tracks are:

Lyrics and cover artwork are also available to be downloaded at our Bandcamp page. Enjoy!

When I reviewed Afrit Nebula’s first gig at The Stag in Issue 28 (April 17) I was struck by the singularity of their sound. I was also surprised by the range of textures and moods they could generate from a small line-up, minus a conventional drum kit and the harmonic support of keyboards. The trio of Elaine Edwards on saxes, Ken Edwards on bass/vocals and Jamie Harris on percussion/vocals had fused elements of avant-jazz, folk-rock and world music to create a distinctive musical identity.
This is reinforced in their new EP release ‘Punkique’. The title track opens with deceptive simplicity  with staccato notes from Elaine’s tenor sax punctuating Jamie’s intricate percussion pattern, a rhythm from Mozambique - or maybe a pulse from the North African deserts, the haunt of the cunning ‘afrit’ spirit. Counterpointed vocals from Jamie and Ken evoke some punkish sprite who flickers in and out of existence like a voudon entity doing the quantum leap. A  tenor sax solo wails over the tribal beat as the vocalists pursue this enigmatic creature who ultimately evades them. ‘Now I can see you…now you are nowhere…’
The second piece is rock’n’roll but not as you might know it from your average tribute band. The Afrits’ cover of Hendrix’s ‘Fire’ raunches along with Elaine’s rasping tenor playing Jimi’s part over Ken’s fuzz bass. Jamie delivers a fiery vocal, propelled by his hand drums and the driving riff. The track redefines the power trio concept, proving that you don’t need a Strat and wall-to-wall Marshall stacks to deliver a totally convincing take on the song.
Elaine’s composition ‘Bulgarian Rock’ is closer to another Edwards joint project - The Moors. The piece draws on Eastern European folk melody and its complex rhythms, in this case 7/8.  Elaine is playing soprano sax here, and is as lyrical on the smaller horn as she is tough on the tenor. She explores the tune in a haunting solo,  loops and spirals of sound that move right to the edge, like Ornette Coleman’s famous ‘harmolodic’ improvisations, but finally resolve.
The final track on the EP is  Jamie Harris’s ‘People Chant’, a visceral holler,  stark as a work song. It begins wordlessly, a slow incantation from Jamie’s falsetto over Ken, followed by an intense soprano sax passage in the mode of John Coltrane, a shamanistic cry that exploits all the sonorities of the instrument. Then Jamie’s words emerge: ‘…people calling…people in boats…people in the sea…speak out…stop what you’re doing…’  The archetypal plea for humanity suddenly acquires a highly topical and specific resonance.
This album challenges narrow preconceptions about musical genre. But the originality of Afrit Nebula’s approach rewards you as you listen again - and again. The music is also very danceable - those polyrhythms  could have you shaking all over…